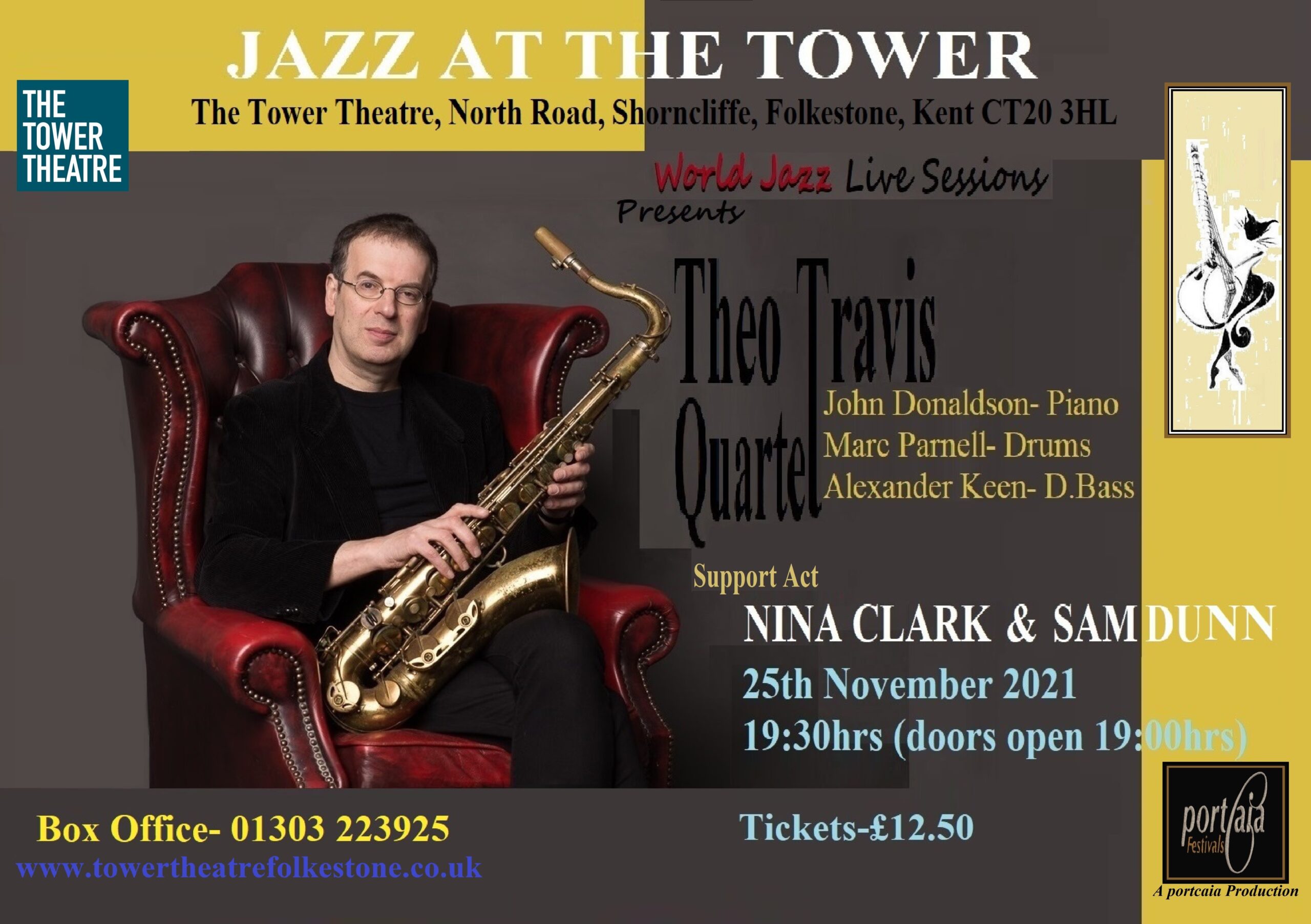 SOLD OUT Theo Travis is one of the finest tenor sax players on the British jazz scene, and a prolific composer and music producer. He has led his own jazz quartet for 25 years,

Theo Travis is one of the finest tenor sax players on the British jazz scene, and a prolific composer and music producer.

He has led his own jazz quartet for 25 years, recorded ten albums as leader having, composed, arranged and produced the material and performed all over the UK as well as at Ronnie Scott’s Club in London over 75 times. He is increasingly known as one of the top saxophone and flute players in the world in Progressive music and has appeared as featured soloist on over 150 albums. Travis has toured the world to great extent with some of the most internationally established artists,

Theo Travis appears with his own Quartet for a performance of original compositions, and a few well know Jazz standards.

Nina and Sam are an experienced jazz duo, with a repertoire curated from the Great American Songbook, Brazilian classics and original compositions, Nina and Sam’s self-contained vocals and guitar duo will bring an elegant atmosphere to the room.

Nina Clark is a jazz vocalist with a passion for melodic performance, whose recent album was supported by Arts Council England. A respected songwriter, Nina’s vocalese of John Scofield’s “Jeep on 35” was arranged for the Scottish National Jazz Orchestra and sung by Grammy award winning jazz vocalist Kurt Elling, whose quartet Clark performed with at Chicago’s famed Green Mill Cocktail Lounge.

Nina has performed in clubs, festivals and events around the UK, the US, Dubai, Europe and New Zealand. Storied music biographer Lesley Ann Jones wrote of Nina “she conjures songs both mellifluous and punchy which she delivers with charm and wit”.

Sam Dunn is a widely respected jazz guitarist, whose swinging and lyrical playing has seen him perform at clubs, concert halls and festivals around the world. He is a regular performer at London’s legendary Ronnie Scott’s, and has also recently played at the Royal Albert Hall, the 606, the Royal Festival Hall, the Vortex and many other jazz clubs across the UK and beyond.

Sam has toured Australia with Grammy nominated US pianist and singer Judy Carmichael, and recently performed with his trio in Valencia, Spain. He is a busy professional jazz musician, and can be heard performing with a veritable who’s who of UK jazz.

“Sam Dunn is a wonderful musician on all levels. He has a wide, interesting repertoire, beautiful sound…equally compelling with ballads and burners.” Judy Carmichael